The first-ever Red Bull Street Style World Final in Valencia, Spain, and the first in two years to be on stage surrounded by spectators, made for a supercharged atmosphere. And if the fans at the Palau de la Música venue were hot to see the latest from Freestyle Football’s elite, the athletes themselves were positively on fire.

After a year of qualification rounds, the initial field of more than 700 hopefuls from all around the world had been whittled down to the elite: 16 men and 8 women serving up new tricks and new styles.

The women’s field was the toughest in Red Bull Street Style history and a fresh name skyrocketed to stardom, as the UK’s Lia Lewis captured the ultimate title by defeating 2018 World Champion Aguśka Mnich of Poland in a tense final round.

The event was just Lewis’s second World Final appearance; but even more astonishing, she only began working on freestyle tricks three years ago.

The influence of dance and acrobatic backgrounds on the style of Lewis and third-place finisher Caitlyn Schrepfer of the USA confirmed an exciting direction for the sport and Lewis won Best Trick with a bridge-to-splits manoeuvre. 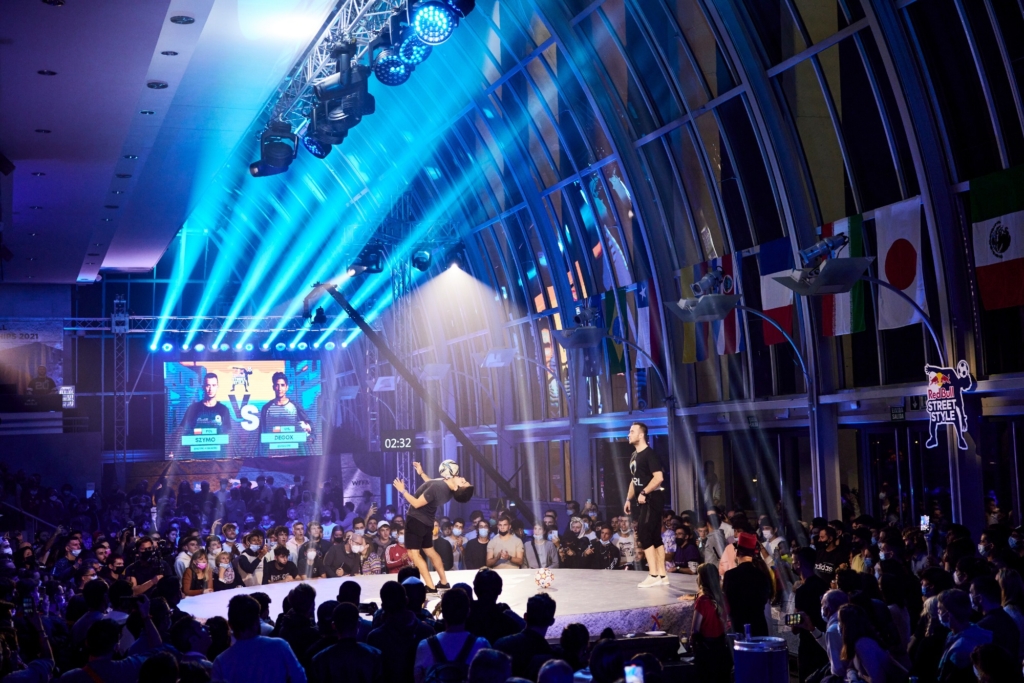 Fans were shocked, however, when four-time World Champion and legend of the sport Mélody Donchet of France failed to make the podium. The French star, who tearfully accepted a long ovation on stage, hinted that it might be her last World Final.

Of course, the athletes weren’t only facing each other. The judging panel in Valencia was a mighty line-up of freestyle title-winners assembled by the WFFA: Tobias Becs of Norway; France’s Séan Garnier, who in 2008 became the first-ever Red Bull Street Style champ; Michał Rycac of Poland; home Spanish star Javi Sanz and two-time Red Bull Street Style champion Kitti Szász from Hungary.

In the male bracket, while the triumph of Norway’s Erlend Fagerli – just reaching his prime and already the greatest the sport has ever known – wasn’t unexpected, what was a surprise was how hard he had to work for it.

After cruising confidently through the first battles, in the final he squared off with Jesse Marlet from the Netherlands, who had never before made it to the concluding round. With nothing to lose, the Dutchman delivered new tricks that pushed Fagerli into some uncharacteristic baubles. But in the end, the Norwegian and his breathtaking transitions were simply on another level.

Fagerli, whose always-innovative brother Brynjar competed in the World Final as well, stated, “I want to say huge respect to Jesse. He’s one of the freestylers who keep pushing all the time to make this sport develop, and I was delighted to compete against him in the final.”

Applauding the Spanish spectators, the triple World Champion added, “I love the audience. The energy has been electric all night, and it has been so good to compete here. We just love Freestyle Football!”.

Rewatch the Studio show on the WFFA official YouTube channel:

Words by Trish Medalen for RedBull.com; pictures by Gianfranco Tripodo for the Red Bull Content Pool.