The Freestyle Football community will celebrate the birth of a new competition this year: the best young freestylers on the planet will be offered a platform to showcase their talent in the World Youth Freestyle Football Championship, a global tournament aimed at male and female athletes under the age of 16.

This competition, which will open its registration process on August 16th and kick off in September through the official WFFA App, will happen on a fully digital basis. Participants will be asked to upload their videos in a dedicated section of the App between September 15th and September 21st; the judges will then evaluate their routines and select the best 16 athletes of the male and female categories, who will then face each other in a knockout stage consisting of quarterfinals, semifinals and a third-place battle. Each of these heats will feature battles of 3 rounds, all through the official App.

The World Youth Freestyle Football Championship will culminate in a Final that will be held online between November 1st and November 9th, 2021. The winners of this decisive showdown will receive a full-year sponsorship of the WFFA partner SWRL and, most importantly, the title of most promising male and female u16 freestylers: the very future of the sport of Freestyle Football! Besides this, a total prize money amount of 3,000€ will be split between the winners, the runners-up and the third-placed athletes of the tournament in both the male and the female categories.
.

.
Here is the full rundown of the tournament:

“We are very proud to present this tournament”, said Steve Elias, President of the WFFA. “We have heard the pleas of the community, particularly of the youngest athletes; they definitely deserve a platform to shine. We are convinced that this will help motivate them to improve their skills, and hence will eventually have a positive impact on the whole sport of Freestyle Football.”

“The pandemic wreaked havoc on our competitive events, but also gave us new unexpected opportunities”, said Lukáš Škoda, Head of Operations of the WFFA. “The World Youth Freestyle Football Championship is an example: thanks to the technology we developed for Red Bull Street Style, we can now present this innovative format for all the young promises to show what they’re capable of.”

“I believe the global Freestyle Football scene definitely needed a space for young athletes to prove how amazingly skilled they are”, said Dutch freestyle champion Jasmijn Janssen, female ambassador of the World Youth Freestyle Football Championship. “I’m thrilled to be supporting the growth of the sport through a great initiative like this!”.

“As a teenager, I would’ve loved to participate in a competition like this one”, said Norwegian-Filipino freestyler Philip Warren Gertsson, male ambassador of the tournament. “I believe it offers a unique opportunity for the stars of the future to shine – and demonstrate how bright the future of freestyle is!”.

“It’s a fantastic new challenge for us”, said Julio Cisneros, Head of Judging at the WFFA and leader of judges at the World Youth Freestyle Football Championship. “We are really looking forward to judging the skills of the next generation of freestylers. No doubt they will bring some never-seen-before tricks to the table and take us out of our comfort zone!”.

More details about the tournament are available on the World Youth Freestyle Football Championship event page. 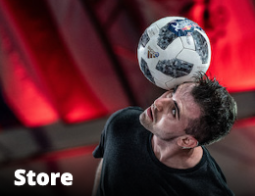